John H. Johnson rose above abject poverty and racial discrimination to build a publishing empire that helped forever change the perception of African Americans in the United States. Johnson Publishing Company became the largest African-American owned and operated publishing company in the world and launched Ebony and Jet, two very successful magazines that gave a voice to millions of black Americans.
Born Johnny Johnson on January 19, 1918, in Arkansas City to Leroy Johnson and Gertrude Jenkins Johnson, a cook at a Mississippi River levee camp, Johnson was a third-generation descendant of slaves. After the death of Johnson’s father in a sawmill accident when Johnson was eight years old, his mother married James Williams, who helped with young Johnny’s upbringing.
During the six weeks the family lived on the Mississippi River levee following the Flood of 1927, nine-year-old Johnson watched the constraints of race disappear when all people, black and white, were forced to work together in their struggle to survive. It was also there that young Johnson developed a keen eye for news—a desire to learn what motivated people, what their desires were, and why they wanted what they wanted.
Because African Americans had no chance for an education beyond eighth grade in Arkansas City, Johnson attended DuSable High School in Chicago, Illinois. After his high school graduation and at the suggestion of a teacher that he adopt a more adult-sounding name, Johnny Johnson became John Harold Johnson. In 1941, he married Eunice Walker. They adopted two children: a son, John Harold, Jr., and a daughter, Linda.
Johnson worked part time at Supreme Liberty Life Insurance Company in Chicago, while attending classes at the University of Chicago. He rose to the position of editor of the company’s monthly newspaper and quickly saw a need and an opportunity for a magazine targeting a black audience— news and thoughts about how black Americans were gaining respect. In 1942, using his mother’s furniture as collateral for a $500 loan, Johnson mailed out the first issue of Negro Digest, which became an instant hit and led to the creation of Johnson Publishing Company. Two other magazines, Ebony and Jet, were initiated in 1945 and 1951, respectively.
Ebony became the number-one African-American magazine in the world, with two and a half million monthly readers. It emphasizes positive aspects of black life in America and provides inspiration to all African Americans. Jet became the number-one newsweekly magazine, with more than nine million subscribers. This magazine provides coverage of current news as well as reports on events or individuals. The influence of Ebony and Jet was immediate and widespread as articles covered black history, culture, and demand for equality in American life. The magazines covered important events, including Martin Luther King, Jr.’s March on Washington and the 1957 desegregation of Central High School in Little Rock and answered the call of leaders of the civil rights movement for reporters to attend and report on unrest in cities throughout America. Both magazines were read with great interest by black Americans across the country.
The success of Johnson Publishing Company can be attributed to Johnson’s determination to break down racial barriers and to convince major advertisers of the huge, untapped black consumer market in the United States. He also succeeded at overcoming long-held discrimination against African Americans in the banking and real estate industries to obtain bank loans, own property, and build offices in elite regions of Chicago and other cities in the United States.
Johnson initiated the Ebony Fashion Fair, the world’s largest traveling fashion show, which was produced and directed by his wife, Eunice Walker Johnson. This fashion show has raised over $50 million for charity since 1958. The fashion show led to the opening of a cosmetics division of Johnson Publishing Company called Fashion Fair Cosmetics, which provides high-quality beauty and skin care products for black women.
Johnson, who was named to the Forbes 400 richest Americans, served on the boards of directors of several Fortune 500 corporations, including Twentieth Century Fox Film Corporation, Chrysler, Zenith, and Continental Bank. He was often in prestigious company and advised many VIPs, including civil rights leaders and several presidents. He served as a special United States ambassador for Presidents John F. Kennedy and Lyndon B. Johnson and accompanied Vice President Richard M. Nixon to Africa and Europe in 1957 and 1959. In 1996 on the fiftieth anniversary of Ebony magazine, President Bill Clinton presented Johnson with the Presidential Medal of Freedom, which is one of America’s highest civilian honors. He also received over thirty honorary doctorate degrees from such universities as the University of Arkansas in Fayetteville, the University of Arkansas at Pine Bluff, Harvard University, and Howard University.
In 2002, Johnson appointed his daughter, Linda Johnson Rice, CEO of Johnson Publishing Company. The company, renamed Ebony Media, was sold to CVG Group; in 2017, Johnson Rice became CEO of Ebony Media, returning a Johnson to the helm of the company. His wife was the producer and director of the Ebony Fashion Fair until her death in 2010.
Johnson died on August 8, 2005, and is buried in Chicago. In January 2012, the U.S. Postal Service released a first-class stamp honoring Johnson as part of its Black Heritage series. 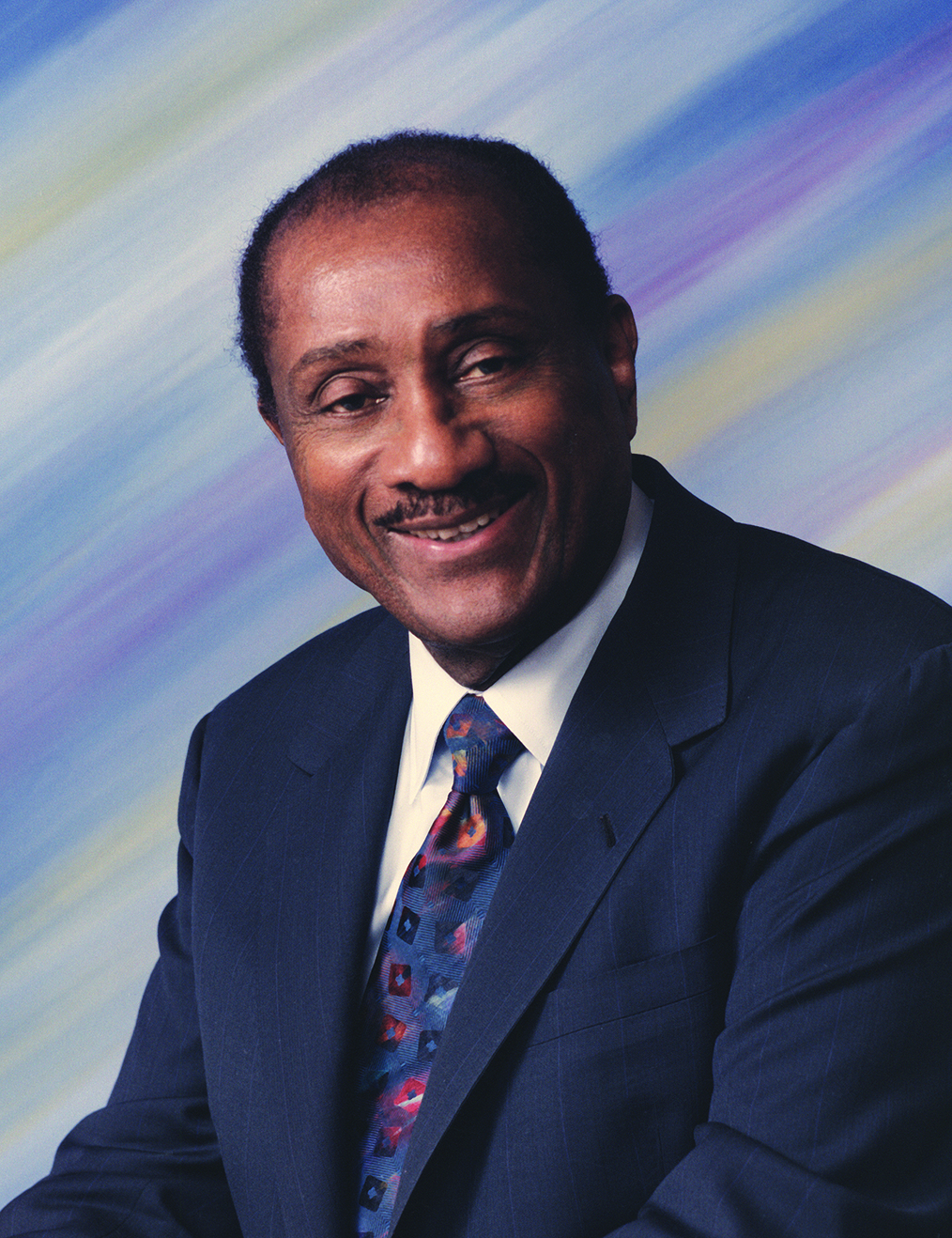