Danny K. Davis is an Arkansas-born politician who has represented the Seventh District of Illinois in the U.S. House of Representatives for almost two decades. First elected in 1996 to the 105th Congress, he began his congressional service in 1997. In 2014, Davis was reelected to the 114th Congress, and he began his tenth term in January 2015.
Daniel K. Davis was born in Parkdale, Arkansas, on September 6, 1941, to Hezekiah Davis and Mazzie Davis. He received his early education in the local schools and graduated from Savage High School in 1957. He earned his Bachelor of Arts degree in history from Arkansas Agricultural, Mechanical, and Normal College (AM&N—now the University of Arkansas at Pine Bluff) in 1961 and moved to Chicago, Illinois. He worked as a clerk in the Chicago Post Office from 1961 to 1965 and taught in the city’s public schools from 1962 to 1968. Davis received a Master of Science degree in guidance from Chicago State University in 1968.
He left the classroom to work as the executive director of the Greater Lawndale Conservation Commission in 1969, before he became director of training at the Martin Luther King Neighborhood Health Center, a position he held until 1971. Davis served as executive director of the Westside Health Center from 1975 to 1981. He continued his formal education and earned a PhD in public administration from Union Institute in Cincinnati, Ohio, in 1977.
He soon entered politics and served as an alderman on the Chicago City Council from 1979 until 1990, when he gained a seat on the Cook County Board of Commissioners. While he made an unsuccessful attempt to secure the 1991 Democratic nomination for mayor of Chicago, Davis remained a member of the County Board of Commissioners. He resigned from the powerful body only after he won his first election to the U.S. House of Representatives in 1996; he had run unsuccessfully in 1984 and 1986. In 1996, he won eighty-three percent of the vote; in subsequent elections, he never received less than eighty percent of the vote in the general election.
In the House, Davis has served on the Small Business Committee, the Oversight and Government Reform Committee, the Education and Labor Committee, the Homeland Security Committee, and the Ways and Means Committee. He has performed additional work on the subcommittees on Human Resources; Energy Policy; Health Care and Entitlements; and Economic Growth, Job Creation, and Regulatory Affairs. An advocate for improved health care, educational opportunities, and job creation, he is also known for his constituent services and communication.
Davis is a member of many caucuses that reflect the areas in which he has been most active. Those groups include the Congressional Black Caucus (for which he has served as secretary), the Congressional Postal Caucus (which he has chaired), the Congressional Children’s Caucus, the Congressional Cancer Caucus, the Congressional Urban Caucus, and the Congressional Labor and Working Families Caucus. He is also a member of a number of health-oriented caucuses and is active civic organizations such as the Urban League, the Boy Scouts of America, the Congress of Racial Equality (CORE), and the National Association for the Advancement of Colored People (NAACP).
Congressman Davis is married to Vera G. Davis, and the couple has two children. During his congressional off-time, he lives in Chicago. 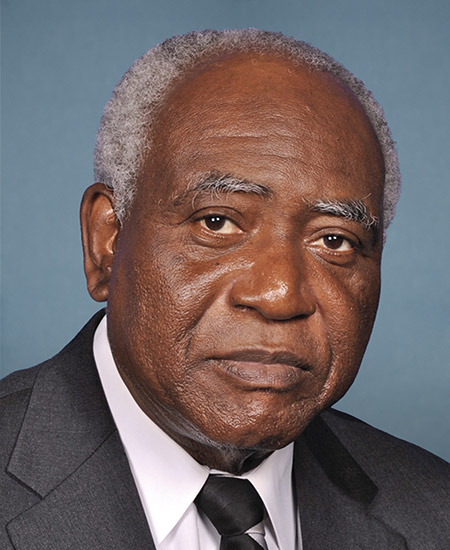