Arkansas native Amina Claudine Myers is a noted pianist, singer, educator, recording artist, and composer who gained prominence in Chicago, Illinois, and New York City beginning in the 1970s. She has had a long career in jazz, choral/orchestral music, and theater. She was inducted into the Arkansas Jazz Hall of Fame in 2010.
Amina Claudine Myers was born on March 21, 1942, in Blackwell, Arkansas. She was reared by her great-aunt, Emma Thomas, and by her uncle, who gave her music lessons early in her life. She studied classical piano at Sacred Heart Catholic School in Morrilton, Arkansas. Myers moved to Dallas, Texas, in 1949 and kept studying piano. She played for a local church, co-led a gospel group, and performed in plays at school. She moved back to Blackwell in 1957 and graduated from Sullivan High School, Morrilton’s African-American high school. In high school, she helped form a gospel/ rhythm and blues (R&B) group. Myers received a scholarship to Philander Smith College in Little Rock, Arkansas, where she majored in music education and played in the jazz band. She continued to study classical piano and became student director for the choir. She also learned to play the pipe organ.
During her sophomore year, Myers began performing at the Safari Room, a jazz club in Little Rock’s African-American Ninth Street business and recreational district. She also took a job playing church organ and later played the organ in an R&B club for three summers when she stayed with her mother in Louisville, Kentucky. During summer vacations from college, she directed and played for church choirs in and around Louisville.
After she graduated from Philander Smith with a Bachelor of Arts degree in music education, Myers moved to Chicago to teach music at George T. Donoghue Elementary School, where she taught for six years. She played with the Gerald Donovan (Ajaramu) Trio as organist for several years. During this time, she became a member of the Association for the Advancement of Creative Musicians (AACM). Myers began composing for big band and various ensembles. In 1975, she wrote and directed the musical I Dream.
In 1976, Myers moved to New York City and soon began composing music for off-Broadway productions. In 1978, she served as choral director at the State University of New York at Old Westbury for one year. She began touring Europe with the Lester Bowie Quintet and the New York Organ Ensemble around the same time. Among other appearances around the world, Myers performed in Cape Town, South Africa, at the North Sea Jazz Festival with saxophonist/composer Archie Shepp and in West Africa with composer/vibraphonist Cecilia Smith.
Myers has released nearly a dozen recordings, including Sama Rou (Songs from My Soul) and Augmented Variations on her label, Amina C Records; Amina Claudine Myers Live in Bremen, Germany, on Tradition and Modern Records; Amina and In Touch on RCA Novus; Jumping in the Sugar Bowl and Country Girl on Minor Music; The Circle of Time on Black Saint; Amina Claudine Myers Salutes Bessie Smith and Song for Mother Earth on Leo Records; and Poems for Piano, the Piano Music of Marion Brown, on Sweet Earth Records.
Her larger works include Interiors, a composition for chamber orchestra conducted by Peter Kotik and produced by the AACM and performed by the S.E.M. Ensemble at the New York Society for Ethical Culture; The Improvisational Suite for Chorus, Pipe Organ and Percussion; When the Berries Fell, for eight voices, piano, Hammond B3, and percussion; and A View from the Inside, a staged piece showing the workings of the mind. This work included original artwork by Myers as well as a chef from New Orleans, Louisiana, and his assistant; a dancer; a trumpeter; a weaver; and a pianist. Focus, a mixed-media piece written for piano, voice, and bass, included photographic images from Myers’s hometown of Blackwell.
Her work How Long Brethren, based on African-American protest songs, was originally created by Helen Tamiris and was re-created by choreographer Diane McIntyre. The original orchestral score was discovered with instrumentation only, so Myers re-created and re-edited parts that were found in pieces from the archives of George Mason University. She conducted the symphony orchestras with choruses: the Wesley Boyd Singers of Washington, D.C., at George Mason University and the Western University Chorus from Western University.
In 2010, Myers was commissioned by the Chicago Jazz Institute to compose and direct Sweet Mary Lou, a composition for jazz orchestra in honor of what would have been the 100th birthday of the late composer, arranger, and pianist Mary Lou Williams. She also composed I Will Not Fear the Unknown for baritonist Thomas Buckner. Throughout her career, Myers has recorded with or performed with many notable musicians and groups, including Charlie Haden’s Liberation Orchestra, Rahsaan Roland Kirk, and Anthony Braxton. Concerts with Sola Liu combining Chinese and African-American musical traditions are among Myers’s many collaborations.
Myers has performed at Lincoln Center, Carnegie Hall, Town Hall, the Brooklyn Academy of Music, the Iridium Club, and Birdland. She has received many honors, including grants and awards from the National Endowment for the Arts, Meet the Composer, and the New York Foundation for the Arts. Myers lives in New York City and is a private instructor in music theory, composition, voice, piano, organ, classical piano, and stagecraft. 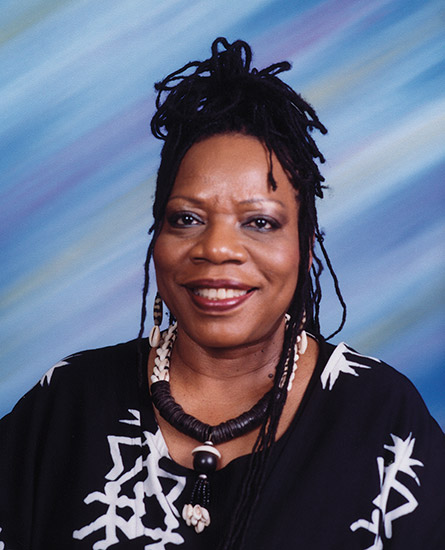