Mahlon Martin was the first African-American city manager in Arkansas. He was later the chief fiscal administrator for Governor Bill Clinton and president of the Winthrop Rockefeller Foundation. As director of the Arkansas Department of Finance and Administration in Clinton’s second administration, Martin held the highest state government office ever achieved in Arkansas by an African American.
Mahlon Adrian Martin was born on July 19, 1945, the son of George Weldon Martin, a postal worker, and Georgietta Rowan Martin, who worked for many years at a Little Rock, Arkansas, department store. He had two brothers and a sister. He graduated in 1963 from the all-black Horace Mann High School.
Martin wanted to be a professional baseball player and received an athletic scholarship to Grambling College (now Grambling State University) in Louisiana, an all-black school. However, when his grandmother became ill, he enrolled instead in nearby Philander Smith College, also a historically black school, and received a degree in business administration in 1967. His first job was selling insurance for American National Life Insurance Company. He completed graduate courses in public administration and executive management at Harvard University in Cambridge, Massachusetts, and Cornell University in Ithaca, New York. Martin married Sheryl Macon of Little Rock, and they had a son and a daughter.
When Little Rock hired John T. “Jack” Meriwether as its city manager during labor strife in 1969, he obtained a Model Cities designation for Little Rock from the U.S. Department of Housing and Urban Development. Meriwether started a program called “New Careers,” which gave on-the-job training to young African Americans to prepare them for professional jobs in a city government that was almost all white. Martin was one of his first recruits. He started as a community organizer and soon moved up to be the city’s recruiting officer.
In 1972, Meriwether promoted him to director of training and operations and then to director of the Central Arkansas Manpower Program, a four-county, $7 million program to train public-service workers. Meriwether left as city manager in 1975, and Martin became an assistant to Meriwether’s successor and gained the title assistant city manager in 1976. He left the government in 1979 to become an administrator at Systematics, Inc., which was based in Little Rock and was one of the world’s largest data-processing firms.
The city hired him as city manager a year later. At thirty-four, he was one of the youngest chief administrators of a major city in the country and the first black city manager of Little Rock. He administered a $32.5 million budget and directed 1,350 employees. Like Meriwether, Martin won a reputation for working productively with disparate factions, including the rancorous board that governed the city.
Clinton, who had been defeated in 1980 after two years as governor, was re-elected in 1982. He persuaded Martin to leave the city government, where he was immensely popular, to become “director of the Department of Finance and Administration, the fiscal administrator of the state government. It was the most sensitive position in the government because the director and his division heads regulated the purchasing, spending, and accounting for all government agencies; and he was the governor’s chief liaison with the legislature, which had to approve the budgets of all state agencies and institutions.
When he dedicated the Mahlon A. Martin Apartments, built with federal housing assistance, in 1995, Clinton recalled that the state was in “an illegal financial condition” when he took office in 1983; and Martin’s immediate task was to cut one percent from every state budget. A couple of years later, a deep recession forced Martin to cut spending across the state’s operations six times in one fiscal year.
“I used to tell everybody that when I was governor,” Clinton said, “Mahlon Martin was the government and I made the speeches. I never saw a fellow who could tell people ‘no’ and make them like it better than he did.”
In 1989, the Winthrop Rockefeller Foundation appointed him its president. He was the second president of the foundation, which was formed in 1974 from the trust of Governor Winthrop Rockefeller, who had died the previous year. The foundation was dedicated to promoting social justice and encouraging balanced economic growth in the state. Martin was responsible for awarding $3 million a year to people and organizations working in education, economic development, and civic affairs to achieve social and economic justice and sustainable growth.
Martin developed cancer, and he died on August 31, 1995. He is buried in Haven of Rest Cemetery in Little Rock.
In 2004, the next African-American city manager of Little Rock, Bruce Moore, named the city’s Employee of the Year Award for Martin. In 2011, the Butler Center for Arkansas Studies, a department of the Central Arkansas Library System, created a fellowship in memory of Martin to support research and programming on public policy in Arkansas. 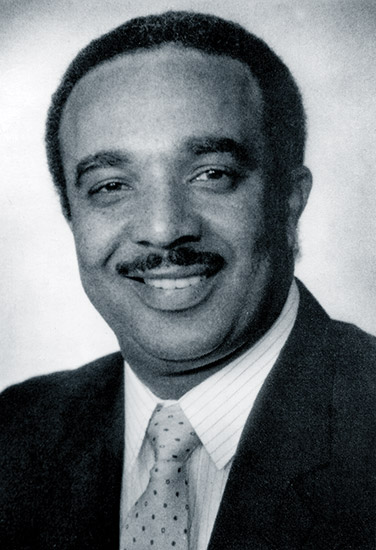