Samuel W. Williams was an African-American Baptist minister, college professor, and civil rights activist who had a major impact on race relations in the city of Atlanta, Georgia, from the mid-to-late 1950s until his sudden death in October 1970.

Samuel Woodrow Williams was born on February 20, 1912, in Sparkman, Arkansas, the oldest of the eight children of Arthur Williams and Annie Willie Butler Williams. As a child, he enjoyed hunting, fishing, and playing baseball and basketball. Nothing, however, gave him as much pleasure as reading. Over his lifetime, he amassed a collection of more than 1,000 volumes. Lessons about racism came early for Williams. Before he reached the age of ten, he was refused service in a Sparkman drugstore for not calling a white sales clerk “sir.” In his teens, his letter to a white peer regarding the community’s segregated youth groups meeting to discuss important racial issues resulted in a threatened lynching.

In 1932–33, Williams attended the historically black Philander Smith College in Little Rock and subsequently transferred to Morehouse College in Atlanta, where he earned a bachelor’s degree before pursuing bachelor’s and master’s degrees in divinity at Howard University. The Howard years (1938– 1942) became important to the development of his personal philosophy concerning human liberation from oppression. In a class paper entitled, “A General Theory of the Freedom Cause of the Negro People,” Williams concluded that freedom of the human species would come only when African Americans were free and that such an eventuality would require intense effort by black people themselves. He undertook doctoral studies at the University of Chicago in pursuit of a PhD. He received an honorary doctorate from Arkansas Baptist College in 1960.

Williams became a chaplain and professor at Alcorn College and Alabama A&M before joining the faculty of Morehouse College in 1946 as chairman of the Department of Philosophy and Religion. At Morehouse, Williams earned a reputation as intellectually rigorous and demanding of his students. Perhaps more importantly, he mentored students who became important leaders: Samuel DuBois Cook, who became president of Dillard University; Maynard Jackson, the first black mayor of Atlanta; and Martin Luther King, Jr., one of the most important leaders of the twentieth century. Williams developed a close relationship with the King family, was one of two faculty members present at King’s 1948 ordination, and co-taught a senior-level philosophy class with King in the fall of 1961. King also studied philosophy under Williams while he was a student at Morehouse.

In the 1950s, Williams began his association with the Atlanta branch of the National Association for the Advancement of Colored People (NAACP). He joined its executive board and later became president of the branch in 1957 when he filled the unexpired term of John Calhoun. Williams served as branch president three more terms—1959, 1960, and 1965. His leadership of the NAACP came during critical times. In 1957, he and the Reverend John Porter filed suit against the segregated Atlanta trolley system, which led to a legal victory in 1959. Williams and Porter had been inspired by the Montgomery Bus Boycott victory, one partly led by King. During Williams’s leadership tenure with the NAACP, the agency filed suit against the Atlanta school board in January 1958 and forced it to begin the long and difficult process of compliance with Brown v. Board of Education. Although the schools were not finally desegregated until after his death, Williams provided much of the pressure that led to the final outcome.

Williams also played a key role in the Atlanta Student Movement. He was one of the adults who convinced student leaders to draft “An Appeal for Human Rights,” the manifesto of the Atlanta Student Movement that was published in early March 1960 in the Atlanta newspapers and the New York Times. As NAACP president, Williams pledged full support for the students and often chided other adults who failed to do likewise. He was a founding member and a vice president of the Southern Christian Leadership Council (SCLC), the main organization with which King was affiliated during his activist days.

When racial progress seemed to be at a standstill in 1963, Williams helped found the Atlanta Summit Leadership Council (ASLC), aiming to pressure the school board and the rest of the city to end segregation, address poverty, and expand mass transit into the predominantly African-American west side of the city. Despite the ASLC’s measured success, Williams’s leadership came under serious assault in late 1967 after he advised public-housing tenants to embark on a rent strike to settle grievances with the Atlanta Housing Authority. The ASLC was forever fractured into two competing organizations, the future effectiveness of which was hampered by squabbling among leaders.

In late 1966, Mayor Ivan Allen established the Community Relations Commission (CRC) and made Williams the vice chairman. The CRC was designed to give grassroots communities a mechanism to voice their concerns to city officials at the highest level, with the CRC as an intermediary. Williams eventually became chair of the CRC and established community town hall meetings and human-relations workshops for city agency managers, as well as made recommendations to end discriminatory hiring and promotion practices at City Hall.

Williams was also a local Baptist pastor of one of the most prominent black Baptist churches in Atlanta: Friendship Baptist Church, founded in 1865. This was the institution that nurtured Morehouse College, Spelman College, and Atlanta University in their early days. In 1947, Williams became assistant pastor of Friendship, and when senior pastor Maynard Jackson, Sr., the father of Atlanta’s first black mayor, died in 1954, Williams became acting pastor and then the permanent replacement. As senior pastor, Williams was the most activist-oriented pastor in Friendship’s history. In a 1968 sermon to the white congregation at All Saints’ Episcopal Church, he pointedly asked them: “What [is] your responsibility for justice?” Likewise, he told the Christian Council of Metropolitan Atlanta that the refusal of churches to take a stand on controversial issues was a “kind of moral pussyfooting.”

Williams’s high profile not only made him a greatly respected figure around Atlanta, but it also subjected him to fairly severe criticism, even from within his own community. In particular, younger men such as John Boone, Joseph Boone, and Otis Smith attacked him as a dictatorial and ineffective leader and accused him of failing to hold elections as mandated by the ASLC and of supporting an ill-advised rent strike by public housing tenants that put public housing residents at risk of eviction without giving any real solutions to their grievances. Even more serious was the charge that he had abandoned the very people he had pledged to fight for when he sided with white officials who were behind the firing of Eliza Paschall, whose contract as the director of the CRC was not renewed because she was viewed as too “pro-Black” by conservative whites on the CRC board of directors.

Williams weathered all of these storms, yet he left an often forgotten legacy of racial progress in Atlanta. The city hung his portrait in City Hall in September 1973 as a symbol of what his life had meant to the people of Atlanta.

Williams died on October 10, 1970, after a surgical procedure. He was survived by his wife, Billye, who later married baseball great Hank Aaron. 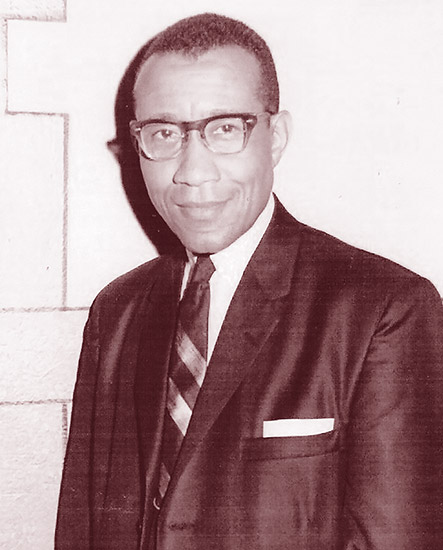