Arkansas native Rosetta Nubin Tharpe, known as Sister Rosetta Tharpe, was one of gospel music’s first superstars, the first gospel performer to record for a major record label (Decca), and an early crossover from gospel to secular music. Tharpe has been cited as an influence by numerous musicians, including Bob Dylan, Little Richard, Elvis Presley, and Arkansan Johnny Cash.

She was born in Cotton Plant, Arkansas, on March 20, 1915, to Katie Bell Nubin Atkins— an evangelist, singer, and mandolin player for the Church of God in Christ (COGIC)—and Willis Atkins. She went by the first names Rosa, Rosie Etta, and Rosabell, and used both her father’s last name and her mother’s maiden name. She began performing at age four, playing guitar and singing “Jesus Is on the Main Line.” By age six, she appeared regularly with her mother, performing a mix of gospel and secular music styles that would eventually make her famous. As a youth, she could sing and keep on pitch and hold a melody. Her vocal qualities, however, paled beside her abilities on the guitar—she played individual tones, melodies, and riffs instead of just strumming chords. This talent was all the more remarkable because, at the time, few African-American women played guitar.

Her guitar style was influenced by her mother’s mandolin playing and by pianist Arizona Dranes. She also sang the popular hymns of the day, including the compositions of bluesman turned gospel musician Thomas A. Dorsey. Indeed, elements of the blues are readily apparent in her guitar styling. Later, her music would be influenced by her work with jazz greats Lucky Millinder and Cab Calloway.

Billed as the “singing and guitar-playing miracle,” she was an added attraction at her mother’s church services. Both mother and daughter worked as members of an evangelistic troupe that worked throughout the South before arriving in Chicago in the late 1920s. There they became part of the growing Holiness movement, a late nineteenth-century offshoot of the Pentecostal denomination which, in the 1890s, led to the formation of COGIC and other new religious groups.

After several years of working with her mother and on the advice of several Chicago promoters, Rosetta Nubin moved to New York in the mid-1930s. She married Minister Thomas A. Thorpe in 1934. The marriage, however, was short-lived and after their divorce, Rosetta kept the last name, changing the spelling to “Tharpe” for use as her stage name. Later, in the 1940s, Tharpe married promoter Fosh Allen.

Tharpe was signed to Decca Records in 1938 and was successful immediately. Versions of Thomas A. Dorsey’s “This Train” and “Hide Me in Thy Bosom,” released as “Rock Me,” were smash hits featuring Tharpe on guitar and Lucky Millinder’s jazz orchestra as accompaniment. These releases started a trend for Tharpe, who recorded both traditional numbers for her gospel fan base and up-tempo, secular-influenced tunes for her growing white audience.

The popularity of her singles led to Tharpe’s inclusion in John Hammond’s black music extravaganza, “From Spirituals to Swing,” held in Carnegie Hall in New York City on December 23, 1938. After this well-publicized event, Tharpe went on a concert tour throughout the northeast. She also recorded with Cab Calloway to some success but fared better with “Trouble in Mind,” “Shout, Sister, Shout,” and “That’s All”—all recorded with Lucius “Lucky” Millinder’s jazz orchestra in 1941 and 1942. Tharpe’s popularity was so great that she was only one of two black gospel acts—the other was the Dixie Hummingbirds—to record “V-Discs” for U.S. troops overseas. In the late 1940s, Tharpe returned to more strictly religious songs, recording “Didn’t It Rain” (1947) and “Up Above My Head” (1947) with Marie Knight. From 1944 to 1951, her main accompanist was Samuel “Sammy” Blythe Price, a boogie-woogie pianist from Texas. His trio backed her on “Strange Things Happening Every Day,” a top-ten “race record.”

Tharpe continued her success in the religious market. Such was Tharpe’s popularity that on July 3, 1951, about 25,000 people paid to witness her marriage to Russell Morrison, her manager, in a ceremony held at Griffith Stadium in Washington, D.C. While her marriages to men were a matter of public record, it is widely accepted that Tharpe also had relationships with women.

Tharpe and Marie Knight parted ways after unsuccessfully trying to enter the blues music market. As a result of the foray into the pop music market, Tharpe’s popularity waned; soon her concert dates dropped off and she lost her recording contract with Decca. Tharpe kept working and had signed with Mercury Records by the late 1950s. She first toured Europe in 1957 and made return trips in the 1960s. She made several live recordings while overseas. Although she never realized her comeback, Tharpe continued to perform. A stroke in 1970 necessitated a leg amputation and caused speech difficulties, but it merely slowed her down. Tharpe continued to tour and perform until her death in Philadelphia, Pennsylvania, on October 9, 1973.

Tharpe’s music and influence continue years after her death. Her songs have been recorded by Elvis Presley, and Johnny Cash spoke of her impact on his music. In 1998, the U.S. Postal Service issued a Rosetta Tharpe postage stamp. In 2003, the album Shout, Sister Shout: A Tribute to Sister Rosetta Tharpe was released, with versions of Tharpe’s songs performed by female artists including Maria Muldaur, Odetta, and Marcia Ball. In 2013, the PBS series American Masters featured an episode on Tharpe, and she was inducted into the Arkansas Entertainers Hall of Fame. 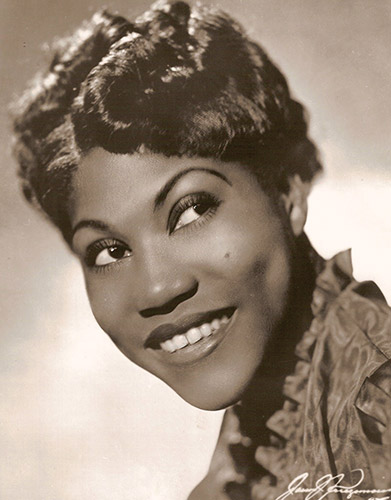